Menopause Facts for 30-Something Women

The symptoms of peri and menopause are a blind spot for too many younger women. We all need to understand what is happening to our bodies, and take control of our health destiny.

At 34 years of age, here are some of the things I know about: how to bleed a radiator, the adventures of Butch Cassidy, the precise amount of ice needed for an excellent G&T. And here are some things I don’t know about: financial products, post modernism, the menopause. The concept of menopause and 30-something women hasn’t crossed my mind.

I’m not sure exactly what picture that paints of me. Evidently, in 34 years, I have acquired knowledge of a variety of (random) things, and yet some things say stubbornly out of reach.

I can put my woeful lack of understanding around investments and pensions down to a societal snag that means money and economics are still over-represented by men. And I’m not too worried about the post-modernist stuff. But I am increasingly troubled that the menopause is as alien to me as the stock exchange because, as a woman, there’s simply no avoiding it.

Much to my embarrassment, I’m a journalist who covers women’s rights, of which many are inextricably linked to healthcare. I’ve even published a book in which I’ve written about the Boston Women’s Health Collective, a radical group who published Our Bodies, Ourselves in 1970, a journal that aimed to educate and inform women about their bodies. And still, despite this, not only do I know nothing about the menopause but it didn’t even occur to me to find out.

Why is the menopause such a blind spot to 30-something women? I decided to conduct the very unscientific method of putting this question to the one place you can be guaranteed some honest answers; the group chat. Made up of six women who I met at university, we are all now in our mid-30s. Most telling was the initial silence. It took a good 24 hours until I received a response. Once one had, the rest followed, but admitting how little they knew, even to their closest friends, was clearly problematic.

“I found it really hard to reply to your message, as I literally know nothing”, replied C, whose mother is a very senior medical professional. When the conversation got going, the group was pretty split. C and R, like me, knew bugger all. L never replied at all, A remembers her mum explaining that the menopause was causing her erratic mood swings when she was younger. M had spoken with a colleague about it so seemed pretty clued up.

It seemed, therefore, unless a 50-something woman in your life was prepared to talk to you about it, the menopause remains a mystery to us 30-something women.

Most interestingly, however, was the rage it seemed to provoke. From M: “It’s another thing that makes me angry about the body inequality between men and women. We spend a life from 12-50 having to deal with pain, mess and mental ups and downs, while having to get on with life as it all was normal! On top of that, baby-making struggles, which makes it all the more crap seeing that’s what our bodies go through it all for!”.

It seemed, therefore, unless a 50-something woman in your life was prepared to talk to you about it, the menopause remains a mystery to us 30-something women.

There was also anger about the lack of knowledge amongst 30-something women. R replied, “Feels like we get minimal info at college about sex ed. Then any future understanding or knowledge of fertility/the menopause, and god knows what else, you have to find out when the time comes!”

MPowered Women’s Dr Stephanie Goodwin is a GP, as well as working in the menopause clinic at Guy’s and St Thomas’ hospital. She sees a lot of younger women with Premature Ovarian Insufficiency (POI), or premature menopause. It appears in women as young as 25, and is something that impacts 1 in 100 women in the UK.

Dr Goodwin says most of the 30-something women (and younger) she sees are clueless about the menopause. As was she when she was younger. “I knew nothing about the menopause when I was 34 – why would I?,” she says. ” I didn’t know anything about it until it dawned on me that I might be menopausal. It is something that naturally one doesn’t think about until you get towards that stage of life. But we all should have an awareness about it because it can occur at any time.

“Lots of the women we see might have actually been menopausal for quite a few years before anyone diagnoses it, by which time they’ve got osteoporosis and other complications.”

The causes of an early menopause are largely unknown but Dr Goodwin points to genetics, cancer treatment, and autoimmune conditions. Alongside the regular menopausal symptoms of hot flushes, poor concentration, anxiety and bad sleep, there will be irregular periods.

“Go back and demand a blood test,” says Dr. Goodwin. “Don’t be fobbed off by anyone telling you you’re too young.”

If you do suspect you might be experiencing a premature menopause, don’t let an uninformed GP put you off. “Many women are sent away believing periods have stopped because of stress. Go back and demand a blood test,” says Dr. Goodwin. “Don’t be fobbed off by anyone telling you you’re too young.”

Dr. Goodwin believes awareness should be taught in schools, and she has seen progress in the momentum of the conversation. She’s also encountering other ways to inform younger women. “I’ve been doing talks to chiropractors, physiotherapists and osteopaths. The healthcare professionals I talk to are often younger women, who don’t know that much about the menopause but want to,” she says. “They are dealing with patients who are dealing with menopausal problems but don’t realise. By educating these other allied healthcare professionals, that’s a really good way to getting to help people. Those younger healthcare professionals are saying to me, ‘Gosh, we’re missing this – this is so useful. Now we know, we can be signposting people in a different way’”.

Currently, there is a movement of women demanding better healthcare. We can see it with black maternity healthcare in the US or what is happening around women and heart attacks here in the UK as we realise that doctors have not properly understood symptoms, dubbed the gender health gap.

I believe it is through this lens, of a healthcare revolution, a demanding of fair and equal treatment, that younger women will be engaged to understand the menopause. After all, there’s a similar revolution taking place with women and money right now, an effort to empower and engage women to take control of their finances. And there are parallels; by increasing understanding, we can persuade younger women to take control of something that might not be apparent this minute in their lives, but will come to be hugely important down the line.

We’re angry and fed up. We want something to change.

This approach, therefore, isn’t so much about age, but taps into a broader mindset about self-empowerment, independence and self-reliance. These are things that carry a lot of social cache right now. As those Whatapp messages show; we’re angry and fed up. We want something to change.

The next day M sends me a link to a song called Fuck the Menopause by punk band Vaginal Atrophy. ‘You nose dived my plane/I’ve been going insane,’ the lead singer, Hot Flush (artist Abigail Hammond) belts out. Cleary, the rage is spreading. Time for the menopause revolution?

For everything you need to know about your perimenopause years, read our doctor’s guide. 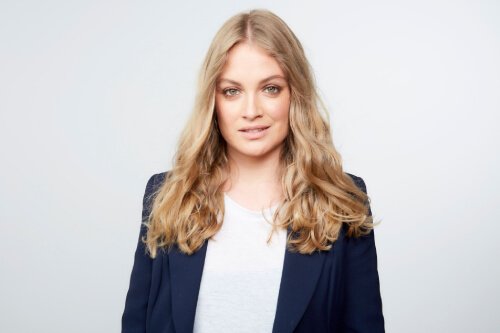 Marisa is a freelance journalist, writing for the Guardian, The Times, The Telegraph, Grazia and Vogue.co.uk, amongst others. She was the first member of staff at The Pool and is the author of The Periodic Table of Feminism.
View All Articles 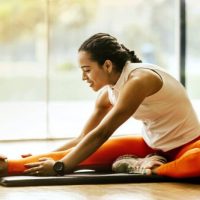 10 Ways to Exercise to Beat Anxiety 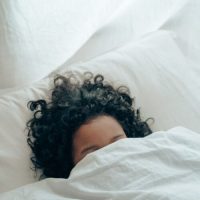 Beauty Fixes For Menopause And Anxiety 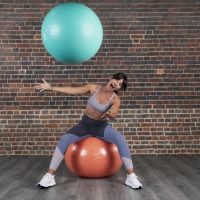 Marisa is a freelance journalist, writing for the Guardian, The Times, The Telegraph, Grazia and Vogue.co.uk, amongst others. She was the first member of staff at The Pool and is the author of The Periodic Table of Feminism.

10 Ways to Exercise to Beat Anxiety

Beauty Fixes For Menopause And Anxiety

Ginger Rogers may have done it backwards and in he

Gym gear designed for our midlife bodies is a bril

Ginger Rogers may have done it backwards and in he

Gym gear designed for our midlife bodies is a bril

Our fave @lifesrosie talking big pants and the cri

When @drstephaniegoodwin gave this description of

@drstephaniegoodwin is back with us at 4pm today f

We are with @piavibekegrace 100% on this one. With